Victorians and the Undead

The Victorians had a fascination with death, it was after all a very common place occurrence. They developed elaborate mourning rituals, found a fascination in all things spiritual including the occult. So I guess it's not that much of a surprise to find that they are also responsible for many people's current perception of vampires. These creatures of the night had existed in story, myth and legend for many centuries before the Victorians sanitized them but before they had been seen as an little more than possessed zombies, an abomination to any idea that they had human characteristics. The Victorians change that image into the one we more associate today with vampires, one where they fit and blend into our society and wreck havoc from within.

A holiday in 1816 with a group of friends who were to become some of the most influential and long lasting authors of their day, Lord Byron, John William Polidori, Percy Bysshe Shelley, Mary Shelley and Claire Clairmont was beset by torrential rain, which force the party indoors and out of such fates of nature the sparks of some of the best loved Gothic literature were born. These include Frankenstein and the re invention of the vampire legend. John William Polidori took an idea from various fragments of work written by Lord Byron on that holiday and in 1819 a new type of vampire appeared in the story 'The Vampyri, this vampire entered high society as a man not a beast in the form of the character Lord Ruthven. This simple beginning was to influence the vampire genre going forward and right up to the present day.

It was the start of an interest in vampires that grew rapidly during the Victorian period. The horror mixed with thoughts that such a creature of terror could mingle among the well to do proved an irresistible mix. Add in new printing techniques and the rise of serial newspapers and magazines and the stories just grew. Varney the Vampire written by James Malcolm Rymer in 1845 was the first to be serialized in such publications and so reach a wider audience. The vampire had by now moved with easy from a gruesome undead creature into someone quite capable of blending in and stalking it's prey in the drawing rooms of high society. As with most things Victorian, morals and taboos of the age started to be added ever more to the mix. The notion of the deserving and the undeserving, virtue and moral lassitude, sexual attitudes of the time were all thrown in the pot for the vampire loving public to digest and be either repulsed by or intrigued.

In 1897 the classic story of Dracula was born from the pen of Bram Stoker. It combined the now literary acceptance of a creature of the night who could blend in to society with older ideas of a malevolent  spirit with powers of the supernatural. The Victorian reading public lapped it up. Written in the epistolary form of letters with added ephemera documents like diaries, ship log accounts and newspaper articles this tale has now been told in countless ways through books, films and plays. It has spawned ever more tales of the undead that has not ceased to this day. Thanks to the Victorians our love affair with vampires seems to have no ending. 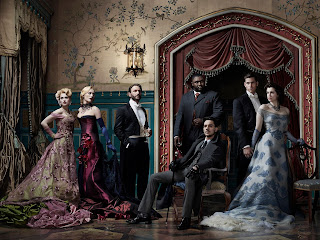 Still from the latest modern TV adaption of the story of Dracula.

Thanks to Holly from Hollys Horrorland for once more hosting
this annual Vampire's Day Soiree. Please visit her blog if you wish
to find the other people playing along today.
Posted by Jane K at 00:30

Email ThisBlogThis!Share to TwitterShare to FacebookShare to Pinterest
Labels: Books and Magazines, Victorian Literature, Victorians and the Supernatural

Thank you for leaving a comment, it is appreciated.